The March 21st edition of the Wall Street Journal features an article by noted health journalist Amy Marcus titled “Hard Choices in Pursuit of Rare-Disease Cures: Patients Urge More Data Gathering as Tighter Federal Budget Crimps Research” which details the importance of rare disease research and the struggles many groups face as budget cuts hamper their pursuit of a cure.

“Last month, at the National Institutes of Health clinical center, Sarah Kucharski and Fran Saplis set up a table at a Rare Disease Day event. The plan was to hand out pens and brochures about fibromuscular dysplasia, which affects the arteries and can cause complications such as high blood pressure and aneurysms.

But first, they wanted to deliver a petition, and a message, to Francis Collins, the NIH’s director.

Late last year, the National Institute on Aging, which is part of NIH, said a long-running observational study of fibromuscular dysplasia and four other rare diseases was no longer collecting data or enrolling patients, and that the study’s goals had been met. Sufferers, arguing that fibromuscular dysplasia’s cause or cure still isn’t known, mobilized. One participant in the research, Kari Ulrich, set up an online petition that when printed out was a phonebook-size document containing names and comments of about 11,000 people.” 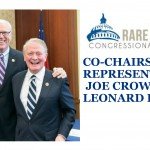