Late last year, the National Institute on Aging, which is part of NIH, halted a long-running observational study of fibromuscular dysplasia and four other rare diseases, saying it was no longer collecting data or enrolling patients, and that the study’s goals had been met. Those affected by this decision argued that fibromuscular dysplasia’s cause or cure still isn’t known, and mobilized in an effort to get a clearer understanding of why the study had been ended. One of the affected participants, Kari Ulrich, set up an online petition asking the NIH to fully address the closure of the study.  This petition quickly gained popularity, and when printed out was a phonebook-size document containing names and comments of about 11,000 people. Their efforts were even documented in an article in The Wall St. Journal.

Now Kari and the other patients in the study have the support of two very prominent Mid-western politicians: Senator Al Franken and Minnesota Governor Mark Dayton.  In a letter addressed to the Honorable Secretary of Health & Human Services Kathleen Sebelius, Senator Franken and Governor Dayton expressed their concern that the sudden discontinuation of the important study has caused undue hardship, and requested a detailed explanation of why the study had been cancelled. 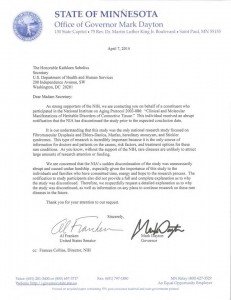