More than 300 patient advocates and industry leaders as well as staff from Capitol Hill and federal agencies joined us last week for the fourth annual RareVoice Awards Gala at Arena Stage in Washington, DC.

Dr. Steve Groft received a Lifetime Achievement award for his dedication to stimulating research and advancing development of therapies during his tenure at the Food and Drug Administration (FDA) and National Institutes of Health (NIH), where he served as Director of the Office of Rare Disease Research from 1993 until his retirement in 2014.

The judges had difficulty selecting the winners among the passionate patient advocates making a difference in states across the country and on Capitol Hill.  Patricia Weltin, President and Founder of the Rare Disease United Foundation, received an Abbey for patient advocacy at the state level. Lisa and Max Schill with RASopathies Network received an Abbey for patient advocacy at the federal level for their efforts in support of the 21st Century Cures Act.  Ronald Bartek, President and Founder of the Friedreich’s Ataxia Research Alliance, received a Lifetime Achievement Award for his tireless advocacy before Congress as well as the FDA and Social Security Administration.

The Chairman and members of the House Energy and Commerce Committee were recognized for their leadership on the 21st Century Cures Act which has several provisions critical to the rare disease community, including incentives to spur development of new therapies. Representative Fred Upton (R-MI) received a Lifetime Achievement Award. Representative Gus Bilirakis (R-FL), G.K. Butterfield (D-NC) and Diana DeGette (D-CO) were honored with Congressional Leadership Awards. Saul Hernandez, Deputy Chief of Staff and Legislative Director for Representative G.K. Butterfield, and Clay Alspach, Chief Health Counsel of the Energy and Commerce Committee, received Abbeys for their work on behalf of the rare disease community. Dr. Kakkis, President and Founder of the EveryLife Foundation for Rare Diseases, ended the awards ceremony with a call to action, urging everyone in attendance to contact their Senators to ask that the many provisions of the 21st Century Cures Act supported by the rare disease community be included in Innovation for Healthier Americans, the Senate companion bill.

Photos of the awards ceremony and reception will be posted on the Rare Disease Legislative Advocates Facebook page and the RareVoice Awards website, so be sure to visit both.

Thank you to Shire, the Presidential Sponsor, and other sponsors including AbbVie, Alexion, Amgen, Amicus, Genzyme, Novartis, PhRMA, Raptor, and Vertex. Proceeds from the Gala fund Rare Disease Week on Capitol Hill, to be held February 29 through March 3 next year. 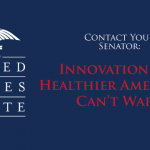