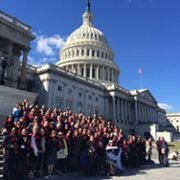 Thank you to the 600+ rare disease patients, caregivers, researchers and other advocates who joined us for at least one event during Rare Disease Week on Capitol Hill in Washington, DC from Monday, February 27th, through Thursday, March 2nd.

The week began at the National Institutes of Health (NIH), where the EveryLife Foundation’s Chief Advocacy and Science Policy Officer presented an update on our work to improve the state newborn screening system and create incentives to encourage biopharmaceutical companies to repurpose approved medicines for rare diseases.

That evening, we hosted a cocktail reception, screening of the documentary Up for Air, and panel discussion. Senator Ed Markey (D-MA) and Representative Jim McGovern (D-MA) made brief remarks.

Aproximately 350 advocates joined us for the Legislative Conference on Tuesday, which was livestreamed for the first time. Experts from Capitol Hill and patient advocacy organizations discussed what to expect from the new Congress and Trump Administration, how to build effective relationships with Members of Congress and staff, and key legislation. Video and presentations will be available on the Legislative Conference resource page.

Advocates began Lobby Day at breakfast with remarks by Dr. Janet Woodcock, Director of the Food and Drug Administration’s Center for Drug Evaluation and Research, as well as Representative Gus Bilirakis (R-FL) and former Representative Brian Baird (D-WA), who urged advocates to be brief, polite and persistent in their meetings with Members of Congress and staff.

On Wednesday evening, we hosted the annual Rare Artist Reception which featured winning entries from the 2016 contest and remarks from several of the artists.

The final event of the week was a Rare Disease Congressional Caucus briefing entitled, ” Advancing Rare Disease Treatments in the Era of Cures and Health Care Reform.” Caucus Co-Chair Senator Amy Klobuchar (D-MN) welcomed advocates and Congressional staff. Video will be posted on the Caucus webpage within a few weeks. 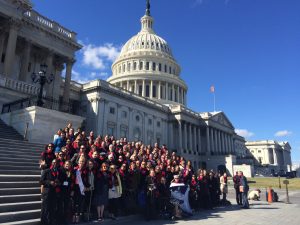