Rare disease advocate says the focus should be on ensuring the accelerated approval expansion and surrogate endpoint guidances become FDA priorities as the rare disease drug program is set to grow under PDUFA V.

Congress mandated specific upgrades to FDA’s rare disease program in the new user fee legislation, but the largest impact may come through the expected changes to the accelerated approval pathway.

Rare disease-related improvements and mandates were sprinkled throughout the prescription drug user fee reauthorization and agency policy changes in the FDA Safety and Innovation Act, which President Obama signed in July (“FDASIA Is Signed, Not That White House Wanted Anyone To Notice” — “The Pink Sheet,” Jul. 16, 2012). Staffing increases, new guidances and reviewer training were mandated to strengthen the agency program and approach to orphan drugs.

Diane Dorman, VP of public policy for the National Organization for Rare Disorders, called FDASIA the most impactful legislation for the rare disease community since the Orphan Drug Act was passed in 1983.

When the guidances and training are completed, the agency should be better able to handle orphan applications, which are gaining more interest from sponsors (“PDUFA Commitment Letter Formalizes REMS Standardization Schedule” — “The Pink Sheet” DAILY, Sep. 1, 2011).

Yet, an advocate said the change that has the potential to make the most improvements is the expansion of accelerated approval, a measure only partially related to the rare disease community since it was intended to help all drugs move through the review process faster.

Emil Kakkis, president of the Everylife Foundation for Rare Diseases, said new orphan drugs will not be developed en masse without clarification from FDA of the use of surrogate endpoints, something that is required as part of the accelerated approval expansion.

“The accelerated approval guidance … is the kind of thing that can open up development of dozens, if not hundreds, of diseases that are not really currently being even studied,” he said in an interview. “The challenge has always been trying to figure out the relative quantity of clinical benefit for a particular surrogate.”

Congress indicated in FDASIA that it wanted FDA to promote increased use of the accelerated approval and fast-track pathways. It added largely the same language describing accelerated approval in FDA regulations to the Food, Drug and Cosmetic Act in an effort to raise the pathway’s profile.

FDA also must “establish a program to encourage the development of surrogate and clinical endpoints” to help FDA better judge whether evidence can predict clinical benefit for a potential accelerated approval or fast track designation.

Draft guidance on implementation of the accelerated approval changes is due one year after enactment, in this case July 2013, with a final version due by mid-2014 at the latest. The guidance must look at issues specific to rare and very rare diseases, according to the legislation.

The PDUFA commitment letter also states that by the middle of fiscal year 2014, the agency rare disease program must have a public meeting to discuss complex clinical trial issues, including surrogate endpoints and use of accelerated approval.

Kakkis said his group is planning a workshop later this year to talk about an outline for the guidance document.

“We want FDA to kind of engage on the basic concept that there’s some science in these rare diseases that is very strong and gives you greater scientific certainty and they need to rely more on that and less on the existence of long-term quantitative outcome data,” he said.

“If we set the standard requiring long-term outcome data for rare diseases, we’ll never treat a single rare disease with a surrogate endpoint or accelerated approval.”

The guidance in theory would help eliminate uncertainty around the accelerated approval process and the flexibility FDA has in orphan drug reviews.

While history indicates FDA has been flexible with orphan drug reviews, industry has asked for more statements from the agency about the types of evidence it would accept as a surrogate endpoint.

NORD officials also are focused on the additional input patients will have to help the agency make risk-benefit decisions.

The intent is to allow reviewers and other officials dealing with orphan applications to hear from those with a condition about how much risk they are willing to tolerate.

Dorman said risk tolerance in the patient community may be the most important aspect of FDASIA implementation. She said patients need to be able to tell reviewers their risk tolerance levels without being too much of a burden on the agency.

FDA said a series of 20 meetings with patient groups, a PDUFA V commitment, will begin in the fall. Several of those meetings are expected to address rare diseases.

Another council at FDA will look at rare disease issues across the agency. Experts in drug, biologic, device and other centers are meeting to improve communication and collaboration and “explore areas for rare disease regulatory science development” as well as deal with product research issues, the agency said in an e-mail.

In addition, FDA and the National Institutes of Health are pushing rare disease groups to organize natural history studies of their conditions in part to show there are enough patients for trials when drugs are ready for testing.

Industry and FDA also agreed in the PDUFA reauthorization to implement a structured risk-benefit framework that ideally will make the decision more predictable.

A draft plan is due by the end of the FY 2013 first quarter, although several potential frameworks already have been released (“International Group Finds Harmony In Benefit-Risk Assessment Framework” — “The Pink Sheet,” Aug. 27, 2012).

The agency has developed a staffing plan and filled one medical officer position at CDER. A search is under way for another medical officer as well as a regulatory scientist, the agency said.

Kakkis said the new staff could provide “more bandwidth” to improve orphan drug reviews, but it remains unclear what function the new staff will have once they are on board.

“If the word is they need to get out and try to help make the development of rare diseases more attractive [and] more predictable, and understand the difference between those drugs and other drugs, then they can do something,” he said.

The commitment letter does not outline roles for the new staff, but states that the centers’ rare disease programs will conduct outreach activities with industry, patient representatives and advocates and disseminate guidance and policy on rare disease drug development.

It is likely they will help expand communication between the agency and drug sponsors, another theme that resonated throughout the reauthorization process (“PDUFA V Commitment Letter Front-Loads Guidance, Meeting Milestones” — “The Pink Sheet,” Sep. 5, 2011). 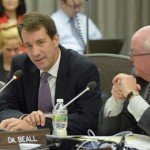