In subsequent years the FDA continued to use the accelerated drug regulations for some cancer indications, but quietly retreated for most other diseases. Accelerated approval is broadly popular among patient groups, and Congress has tried to push the FDA back on the right track multiple times since the promulgation of the 1992 regulations. In 1997 and 2012 Congress codified and expanded FDA’s accelerated approval authority, but the agency has not fully implemented those statutes. 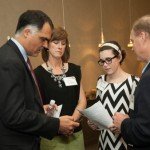 Ask Your Candidates! where they stand on medical progress
Scroll to top