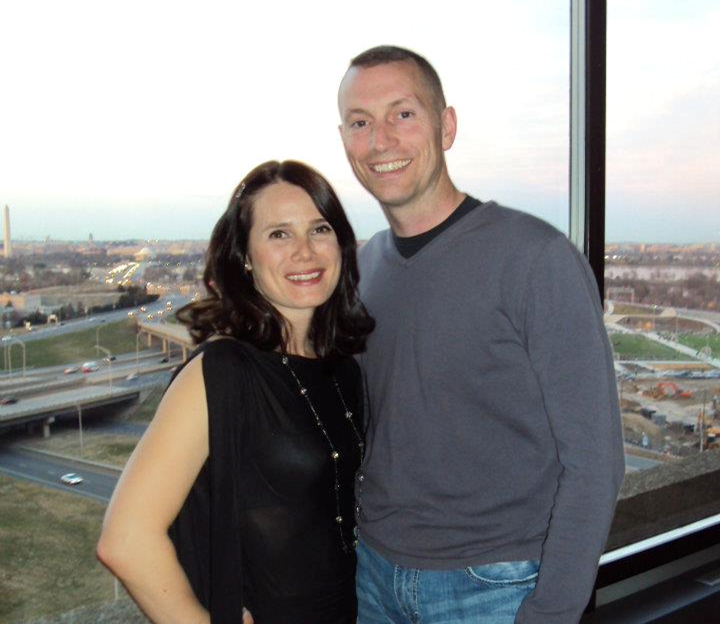 I am a 33-year-old mother of a 2-year-old boy and wife to a wonderful US Soldier.  In July 2011 we moved from Seattle to DC. Hello sunshine!

On August 18, 2011,  I was diagnosed with Epitheliod Sarcoma (ES), a rare and aggressive form of cancer.  I did what anyone in this day and age would do; I consulted the bible that is Google!  The prognosis was bleak, to put it mildly. However, I am of the mindset that if this disease is so rare that it has little data available, I will make my own data and try not to dwell on the figures in front of me.

When given the option of a below-the-knee amputation, I was also given the best odds of survival I had heard since my diagnosis.  It was a no-brainer.  My husband cried in shock and I cried with relief!

Following surgery I found a small ES support group online. It was this group that alerted me to the fact that February 29, 2012, was World Rare Disease Day.  A Capitol Hill Lobby Day was coordinated by the Rare Disease Legislative Advocates (RDLA).  RDLA partnered with the Sarcoma Foundation of America, the EveryLife Foundation for Rare Diseases, and several other organizations to ensure that rare disease advocates were present on Capitol Hill.

With no previous advocacy experience, I was nervous about what to expect and who I would meet. But, I also had a strong urge to want to do something to help.  I consider myself lucky as far as ES patients go; I haven’t had to take any medications or have chemotherapy or radiation treatments.  There are many people out there wondering if the latest combination of drugs they are being given will somehow work for them. They needed a voice.

During our breakfast meeting in Washington, DC, we were given an overview of the Congressional Rare Disease Caucus and two important pieces of legislation: the ULTRA act and Creating Hope Act.  I found everyone to be so passionate about their work.  I was instantly eager to get to Capitol Hill to discuss my newfound knowledge. The legislation made complete sense; how could Congress not want to back them?

I attended my first meeting with Danielle, another Lobby Day participant and an experienced advocate. We went to the office of Rep. Jim Moran (D-VA) and spoke with his staff person, Marcia. She was very welcoming. Congressman Moran is already a member of the Rare Disease Caucus and Marcia believed he would be supportive of the Acts we discussed.  As an introduction to advocacy and Capitol Hill, I couldn’t have asked for a better meeting or staff.

Next was a meeting in Sen. Jim Webb’s (D-VA) office. His staff seemed pleasantly surprised that there was no cost to them involved in the Acts. He asked us what resistance has been faced so far.  He could appreciate the simplicity and commonsense approach to both bills and couldn’t see why there would be much resistance. We left feeling that he was interested in what we had to say and that the Senator would do further research.

Finally, in Sen. Mark Warner’s (D-VA) office we were advised that healthcare is not an issue that the Senator usually plays a lead role on, but that he would discuss it further with the members of the Senate who would be able to take action on our behalf. He appeared to appreciate what a significant impact it would have if the FDA could fast-track the drugs needed to treat rare diseases.

Overall I was impressed with the time given, questions asked and responsiveness to the ULTRA Act and the Creating Hope Act.  The experience highlighted to me that perhaps it is only when we are personally touched in some way that we really understand the importance of speaking out for one another and trying to make a difference. I came away from the day excited that I can use my own personal misfortune and voice to help others.  I hope to take part in more Advocacy work in the future.