Hardly a week goes by without news of FDA’s priority review voucher (“PRV”) programs. The last several weeks are no exception. In this blog post, we focus on five key updates related to FDA’s tropical disease and rare pediatric disease (“Pediatric”) PRV programs:

On August 19, United Therapeutics announced the sale of its rare Pediatric PRV for an incredible $350 million to AbbVie Inc. We discussed FDA’s issuance of this Pediatric Voucher to United Therapeutics for Unituxin here. As the graph below shows, the value of PRVs continues to climb dramatically. 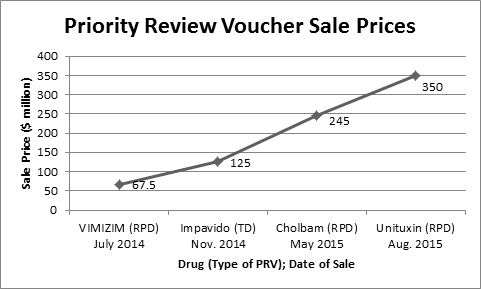 On August 20, 2015, FDA published a final order to add two new diseases, Chagas disease and neurocysticercosis, to the list of qualifying tropical diseases. Recall that, in order for a drug product to be eligible for a PRV, four requirements must be met:

Thus, a sponsor for a drug that treats Chagas disease or neurocysticercosis that meets the requirements above would be eligible for a tropical disease PRV.

Section 524(a)(3)(R) of FD&C Act permits FDA to include “[a]ny other infectious disease for which there is no significant market in developed nations and that disproportionately affects poor and marginalized populations.” (Emphasis added.) In its final order, the Agency also affirmed its commitment to using “a flexible approach” to tropical disease designations based on “scientifically informed, qualitative assessment of disease candidates.” FDA also announced the establishment of a public docket that will remain open to receive future suggestions for tropical disease designations. That docket is here.

The final order explains FDA’s interpretation of the key elements of section 524(a)(3)(R) of FD&C Act:

“Developed nations” – According to the order, “FDA will use a country’s presence on the World Bank’s list of ‘low income economies’ . . . as evidence that the country should not be considered a ‘developed nation’ for purposes of ‘tropical disease’ determination.”

“No significant market” – FDA notes the difficulty in providing a rigid definition of “no significant market” and instead proposes the following factors be considered in determining whether a “significant market” exists in developed countries: (1) occurrence of the disease in developed nations; and (2) the existence of a sizeable indirect market for the tropical disease drug (e.g., government, including the military) that would constitute a financial incentive for drug development.

Disproportionately affects poor and marginalized populations – As with the term “no significant market,” FDA rejected a single definition in favor of four factors that must be weighed. These factors are: (1) the proportion of global disability-adjusted life years for the disease that is attributable to developing countries; (2) the relative burden of the disease in the most impoverished populations within the countries in which it is found; (3) the relative burden of the disease in infants, children, and other marginalized segments of the population; and (4) whether WHO has designated it as a neglected tropical disease.

Applying these standards, FDA exercised the authority granted to it by the Adding Ebola to the FDA Priority Review Voucher Program Act in December 2014 and added Chagas disease and neurocysticercosis to its list of diseases that qualify for the tropical disease voucher program.

Bonus:  On August 24, 2015, Mid-Atlantic BioTherapeutics, Inc. submitted a citizen petition requesting that FDA add the rabies virus to the list of qualifying tropical diseases.  Notably, rabies is on WHO’s list of neglected tropical diseases, as is cysticercosis/taeniasis.

On August 19, 2015, FDA announced that Sanofi-Adventis had redeemed a Pediatric PRV for its Praluent (alirocumab) NDA.  With its approval on July 24, 2015, Praluent became the first approved PCSK9 cholesterol therapy in the United States.  The PCSK9 therapeutic class is expected to a blockbuster, with sales projected to be in the billions of dollars per year.

The interesting part of this story is that Amgen’s Repatha beat Sanofi’s Praluent to market in Europe; but, ostensibly, through its redemption of a rare pediatric disease priority review voucher, Sanofi was able to reach the U.S. market before Amgen.  The Praluent approval came a month ahead of Repatha’s August 27, 2015 PDUFA date and approval.

Drugs that are first-to-market often enjoy considerable benefits over second-comers.  U.S. payers, for example, are quick to cover new drugs, and products that are first-to-market often have significant marketing advantages and sales momentum.  Sanofi’s $67.5 million move to accelerate its entry into the U.S. market for its PCSK9 therapy will be closely watched.  After all, it will be a bellwether of whether industry can justify the high prices paid for priority review vouchers.  If things go well for Sanofi, the demand for and price of subsequent PRVs should be high.

An Update to the Advancing Hope Act

In March 2014, Representative G.K. Butterfield (D-NC) introduced the Advancing Hope Act (H.R. 1537) in the House of Representatives.  In our post on the bill, we noted the effort to make the Pediatric Voucher program permanent.  We also noted the bill’s proposal to change the tropical disease voucher program.  At the time, we noted that such changes not only seemed out of place, but they could be counterproductive.