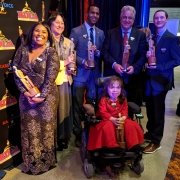 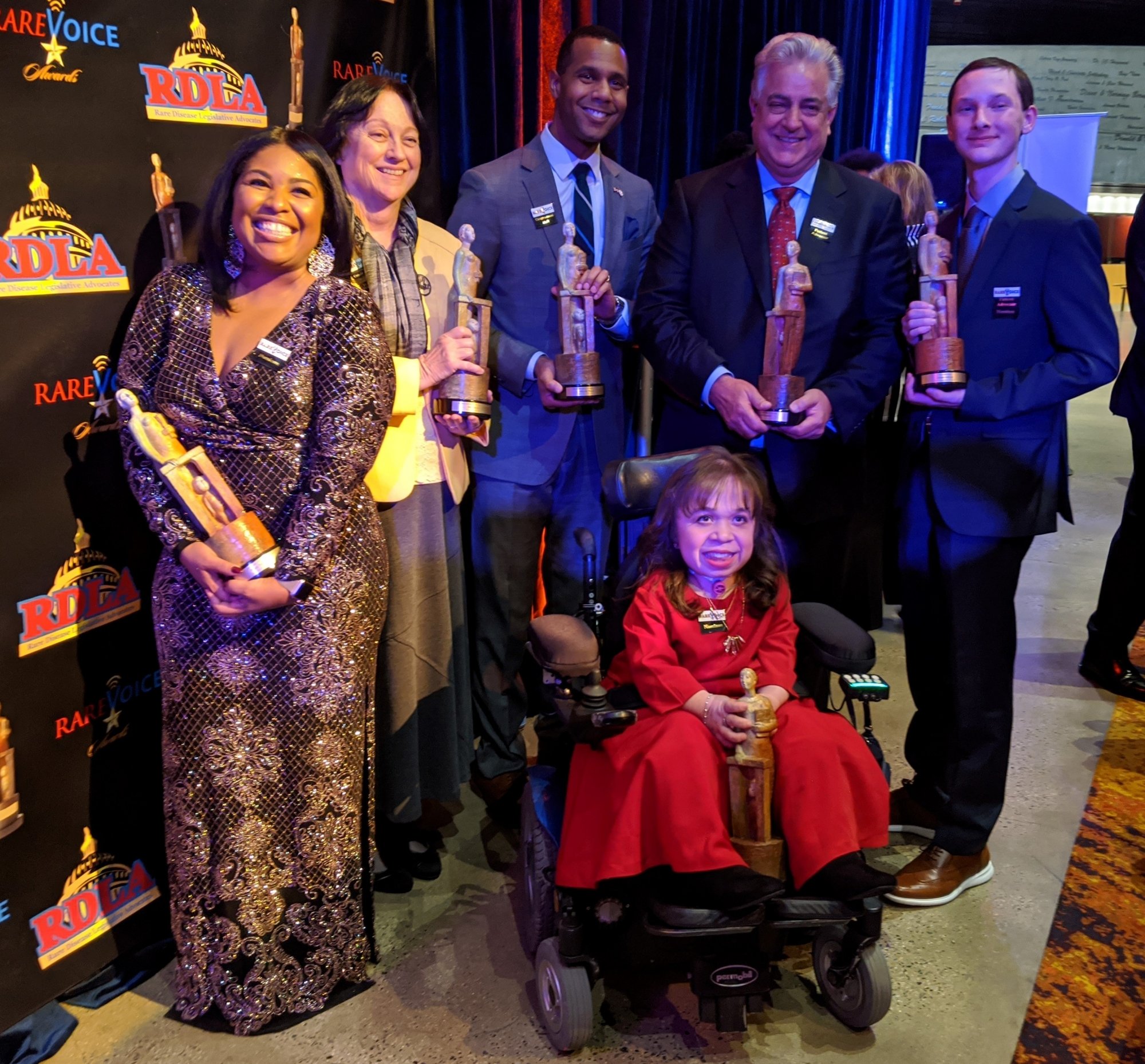 (Washington, D.C., December 5, 2019) Rare Disease Legislative Advocates (RDLA), a program of the EveryLife Foundation for Rare Diseases (ELF), presented RareVoice Awards to individuals whose public policy advocacy leadership is saving lives and providing hope to millions of children and adults who live with rare diseases. RDLA is committed to growing the patient advocacy community and working collaboratively, thereby amplifying the patient voice to be heard by local, state, and federal policy makers.

“It is our mission to ensure the 30 million people living with a rare disease in the U.S. has access to early diagnosis and treatment,” said Julia Jenkins, Executive Director of ELF. “The individuals we honor tonight are courageous, inspirational change-agents who have demonstrated passion and dedication in the drive for federal and state legislation that helps make that vision a reality.”

At the event, held at Arena Stage in Washington, D.C., United States Senator Roger Wicker (R-MS) and Representative Lucille Roybal-Allard of California (D-40), were honored with the RareVoice Abbey Award for Congressional Leadership for their tireless efforts in support of the rare disease community.

Dr. Emil Kakkis, MD, PhD, President & CEO of Ultragenyx, geneticist, ELF Founder and current board member, was presented with the Lifetime Achievement Award for dedicating his life to the development of novel life-saving drug treatments for rare diseases, most notably, the creation of Aldurazyme to treat patients with mucopolysaccharidosis (MPS 1), a rare genetic disorder that affects many body systems and that leads to organ damage.

A highlight of the event was the presentation of the Teen Advocacy RareVoice Award to Aidan Abbott. Abbott, a 14-year old from Slinger, Wisconsin, was born with ectodermal dysplasias (ED), a rare congenital disease that affects hair, skin and sweat glands. Some patients with ED are born without many or all of their teeth and suffer collapsed jaws and facial deformation.

After struggling to obtain health insurance coverage for his missing teeth, Aidan worked with Senator Tammy Baldwin (D-WI) to write and name the Ensuring Lasting Smiles Act, legislation that would ensure health plans cover medically necessary services related to a patient’s anomaly or birth defect, including any serious dental and oral-related procedures that are necessary to maintain health and overall function.

Via her video salute to Aidan at the event, Senator Baldwin said, “Aidan never stops fighting for families like his. Your story continues to inspire me, and I can’t wait to see what we accomplish together.”

When presented with his award, Aidan told attendees, “Never stop fighting for what you know is right. I won’t stop fighting until the Ensuring Lasting Smiles Act becomes the law of the land because it will make a huge difference for me and others who have ectodermal dysplasias and congenital anomalies.”

Additional awards were presented to the following outstanding advocates:

• Isabel Bueso, a native of Guatemala, was presented with the Federal Advocacy Award. Isabel came to the U.S. to participate in a clinical trial for mucopolysaccharidosis type VI (MPS VI). For six years she has become an advocate for rare disease issues, including newborn screening, NIH funding and orphan drug designation. Isabel is awaiting notification of her medical deferred action status, since the program was reinstated this fall.

“Isabel Bueso is a remarkable soul,” said California Congressman Mark DeSaulnier (D-11). “Whether advocating for students with disabilities or fighting to save herself and her family from deportation, Isabel has demonstrated time and again that she is brave and strong. In the face of adversity, I have come to admire Isabel for her courage to use her voice to help others and her vibrant and positive attitude. I cannot think of a more deserving person for this honor.”

• Nikia Vaughan, of Baltimore, Maryland, the mother of daughter Cimone, seven, who was diagnosed with sickle cell disease in 2012, was presented the State Advocacy Award for her effort to pass State Bill 161 in 2018. The landmark legislation put into place new mandatory healthcare services for children with sickle cell in Maryland schools.

Maryland Representative Dutch Ruppersberger (MD-2), Nikia’s Congressman, congratulated her by saying, “Maryland’s Second District is home to many amazing community leaders and Nikia Vaughan is no exception. Nikia has been a passionate advocate for sickle cell awareness on behalf of her daughter, Cimone, and even helped pass legislation establishing new guidelines for providing services to students with sickle cell in our public schools. It is an honor to congratulate Nikia on her nomination for a RareVoice award and thank her for her tireless work on behalf of the entire rare disease community.”

Mike Porath, founder and CEO of The Mighty, the leading digital health community, served as masters of ceremonies for the event, while Tilea West, the 2019 Cherry Blossom Queen and rare disease advocate, presented the awards.
The RareVoice Awards is an annual celebration, now in its eighth year, to honor advocates who give rare disease patients a voice on Capitol Hill and in state government. Patient advocates, industry executives, and Congressional and government agency staff gather to honor these outstanding advocates in the rare disease community.