Established in 2009, the Rare Disease Congressional Caucus is bipartisan (comprising both Democrats and Republicans) and bicameral (comprising both Representatives and Senators). The original GOP Co-Chair Congressman Fred Upton (R-MI) has become Chairman of the House Energy and Commerce Committee, arguably the most powerful House committee. Jurisdictional issues within the committee include Food and Drug Administration oversight as well as a myriad of issues related to healthcare reform. Committee rules require that Rep. Upton remove himself from all Caucuses. While Upton is not able to serve as the Rare Disease Caucus Co-Chair, he remains passionate about helping patients with rare diseases and helping us seek legislative solutions. He will continue to be a trusted ally to the rare disease community. Upton recommended that Leonard Lance (R-NJ) take over as the Republican Co-Chair of the Caucus.

After welcoming remarks from Caucus Co-Chair Senator Amy Klobuchar (D-MN), the panelists addressed implementation of the 21st Century Cures Act, reauthorization of the Prescription Drug User Fee Act, efforts to repeal and replace the Affordable Care Act, new models for rare disease drug development such as repurposing, and the role of incentives to encourage the development of orphan therapies.

The final Rare Disease Congressional Caucus briefing of 2016 focused on the Prescription Drug User Fee Act (PDUFA), the agreement between the biopharmaceutical industry and Food and Drug Administration (FDA) regarding user fees paid by industry to supplement federal funding for human drug review.

Congress will need to reauthorize PDUFA before the current agreement expires at the end of September 2017, which will be an opportunity to include provisions to encourage the development and streamline the review of rare disease treatments.

On September 14, 2016, the Rare Disease Congressional Caucus gathered a contingent of thought-leaders in the rare disease space to discuss Strengthening Medical Innovation in America for Rare Disease Patients.

END_OF_DOCUMENT_TOKEN_TO_BE_REPLACED

We applaud these legislators for taking leadership on the issues that are important to the rare disease community. You can find the complete Rare Disease Congressional Caucus membership at https://rareadvocates.org/rarecaucus/.

12-16-15 – Washington, D.C. – In a show of bipartisan support for the rare disease community, members of the House and Senate have come together to form the first bicameral Rare Disease Congressional Caucus.

The Caucus will be critical in raising awareness of the challenges faced by rare disease patients and serve as a platform for giving those individuals a voice in both the House and Senate. In addition, the Caucus will convene briefings throughout the year to educate Congressional staff on topics of importance to the rare disease community.

The Caucus will be co-chaired by Representatives Lance (R-NJ) and Crowley (D-NY)  and Senators Hatch (R-UT) and Klobuchar (D-MN).

“Throughout my time in the Senate, I have worked hard to help the 30 million Americans with rare diseases,” Sen. Hatch said. “While we have previously taken important steps, like passing the Orphan Drug Act, the fact that 95 percent of rare diseases currently have no treatment shows that much more needs to be done. Senator Klobuchar has been a terrific partner on legislation to get vital treatments to patients in need, and I am honored to join her as Senate Co-Chairs of the Rare Disease Congressional Caucus.”

“While there are about 7,000 known rare diseases, there are fewer than 500 drugs approved to treat any of those conditions,” Sen. Klobuchar said. “It is critical that we work together to increase the number of safe, effective, and affordable treatments that are available for people with rare diseases. I have long worked with Senator Hatch on this issue and I look forward to continuing this work as a Senate Co-Chair of the Rare Disease Congressional Caucus.”

The Rare Disease Congressional Caucus, originally formed in 2009 by Rep. Upton (R-MI), is currently comprised of 88 Members of the House and will be expanded to include the Senate.

“We are grateful to our House champions and to Senators Hatch and Klobuchar for stepping-up to lead this Caucus on behalf of the rare disease community. We are looking forward to raising awareness about the importance of public policy to spur the development of new therapies for rare disease patients,” said Julia Jenkins, Executive Director of the EveryLife Foundation for Rare Diseases.

Rare Disease Legislative Advocates (RDLA), a program of the EveryLife Foundation for Rare Diseases, will continue to coordinate regular Hill briefings and act as a legislative clearinghouse for the patient community, with the goal of mobilizing patients to be effective legislative advocates (www.rareadvocates.org). 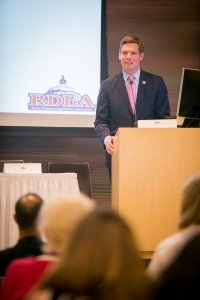 In July, Rep. Eric Swalwell (D-CA) became the 89th member of the Congressional Rare Disease Caucus. Congressmen Swalwell has consistently urged Congress to increase funding to the National Institutes of Health (NIH) in order to fund the research necessary to battle the rare diseases that affect 30 million Americans.